The capricious Fae have to be my favourite to write about – you never know what they’re going to do!

I used the Gancanagh in a story earlier this week and thought I’d share the folklore surrounding this mysterious being.

A lesser known fairy from Irish folklore, the Gancanagh is known as the love-talker due to his love of seducing human women. The Gancanagh is related to the Leprechaun. He always appears with a dudeen in his mouth which is a traditional Irish pipe, he casts no shadow and birds will stop singing in his presence. He is well known for his love of idleness and being lazy.

The Gancanagh likes to seduce and make love to shepherdesses and milkmaids. He will whisper into their ears with his enchanting voice and promptly disappear after making love to them, leaving them to pine for him. Few women survive after meeting the Gancanagh as they usually die of despair and a broken heart. It is said that meeting the Gancanagh will bring you bad luck. Any man who has ruined his own fortune through womanizing is believed to have met the Gancanagh.

Like all fairies the Gancanagh can be warded off with Iron.

Gancanagh, or “love talker,” comes from Irish mythology and is a male fairy-heartthrob that is literally irresistible to women. The attraction and lust he inspires is so intense that some women die from withdrawal after they’ve had a taste of his bad touch. He is said to be the last of his kind, and he roams the forests alone, assuming he can find the time between all the passionate affairs.

You can normally spot Gancanagh by his smell, but if you are of the male persuasion you might find a debonair little man with a clay pipe and a farmer’s hat. He has no shadow and no animal makes a sound when Gancanagh is around. His dark, baritone voice is all the sound his forest and lady-friends need.

This lil’ fairy fellow has what every man wants: pungently addictive pheromones secreting out of his pores. Essentially, we’re talking about the Tom Selleck of the fairy world. Gancanagh’s scent lures many a maiden towards his forested-digs, so what else can he do? Other than them, I mean.

After fornication, Ganacangh disappears into the mist, leaving his new maiden to pine the night away. These women are left in incredible states of depression, and often die shortly after from withdrawal, over-pining, or fighting over Gancanagh’s love.

There’s even an entry of this Fae in the Urban Dictionary!

A Gancanagh is a male faerie in Irish mythology that is known for seducing human women.  The Gancanagh are thought to have an addictive toxin in their skin that make the humans they seduce literally addicted to them. The women seduced by this type of faerie typically die from the withdrawal, pining away for the Ganacanagh’s love or fighting to the death for his love.

The Gancanagh was addicted to seducing mortal women, which eventually lead to the women’s death.

WB Yeats talks about this creature in Fairy and Folk Tales of the Irish Peasantry:

O’Kearney, a Louthman, deeply versed in Irish lore, writes of the gean-cānach (love-talker) that he is “another diminutive being of the same tribe as the Lepracaun, but, unlike him, he personated love and idleness, and always appeared with a dudeen in his jaw in lonesome valleys, and it was his custom to make love to shepherdesses and milkmaids. It was considered very unlucky to meet him, and whoever was known to have ruined his fortune by devotion to the fair sex was said to have met a gean-cānach. The dudeen, or ancient Irish tobacco

pipe, found in our raths, etc., is still popularly called a gean-cānach’s pipe.”

The word is not to be found in dictionaries, nor does this spirit appear to be well known, if known at all, in Connacht. The word is pronounced gánconâgh.

In the MS. marked R.I.A. 23/E. 13, in the Roy’ Ir. Ac., there is a long poem describing such a fairy hurling-match as the one in the story, only the fairies described as the shiagh, or host, wore plaids and bonnets, like Highlanders. After the hurling the fairies have a hunt, in which the poet takes part, and they swept with great rapidity through half Ireland. The poem ends with the line-

[paragraph continues] “and I had travelled the five provinces with nothing under me but a yellow bohalawn (rag-weed)”. [Note by Mr. Douglas Hyde.]

There’s also a terrifying tale of how the Gancanagh is an incubus who is still roaming the world, finding his victims to only leave them in “all-consuming passion” mode which only leads to madness, despair and death. You can read the tale here. http://gotireland.com/2013/10/04/irish-faerie-folk-of-yore-and-yesterday-the-gancanagh/

There’s a wiki created about the Gancanagh which is fun to read:

A handsome male fay, the Gancanagh typically has red, brown or black hair (although blond ones are occasionally seen). It is more handsome than the average man, and can often be seen with a wooden smoking pipe in its mouth.

However, fay cannot stand smoke, and so the Gancanagh will never actually use the pipe (this is undoubtedly just to appear more suave or charming to any potential lovers).

The Gancanagh commonly wears the attire of well-dressed middle-to-upper class Irishmen or Scotsmen.

Unlike the Incubus (with whom it is often compared), the Gancanagh is fairly laid-back and has no problem with males (of their own or another species); it especially enjoys, among men, the opportunity to hear and tell raunchy jokes. It is also very flirtatious with women, but often refrains from physical contact with a woman, unless it finds her attractive.

The only true problem the Gancangh has with other beings, in fact, is an overwhelming phobia of commitment, responsibility and serious relationships. While the Gancanagh loves mating with women (sometimes even numerous partners at a time), it prefers to sow its “wild oats” as much as possible; being too affectionate frightens it away; and being with the same woman for too long results in it getting bored (and eventually emotional cruelty; in particular, manipulating the woman for entertainment).

It is especially hedonistic, and sees anything short of a life fully-devoted to pleasure as a highly unattractive prospect. In particular, it is somewhat nocturnal, fond of nighttime activity, and craves the warmth of a fireplace (often, its idea of romance is not complete without a warm, roaring hearth or a bonfire).

Because of its personality (its fiery, passionate desire for the opposite sex, fondness of a pipe it cannot smoke, and especial desire to warm itself by any fireplace it should happen by), the Gancanagh was speculated in Scotland to have some preternatural connection to the element of fire. This speculation is generally accepted. 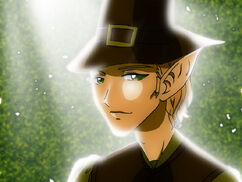 There are alternate spellings for Gancanagh and some of the folklore only appears under these other names.

Beware the handsome Irish Love-talker, a clay-pipe smoking fairy who seduces solitary maidens with his handsome looks and sweet whispers, although his lips are cold and he casts no shadow. His conquest accomplished, he vanishes into thin air, abandoning the lovelorn girl to her fate: to slowly fade away out of despair and a broken heart.”

– The Element Encyclopedia of Fairies by Lucy Cooper

In the folklore of Ireland and Scotlant the solitary Gan Ceanach (“love talker”) appears in secluded glens as a debonair little man smoking a dundeen (clay pipe). He casts no shadow and a mist lingers near him. Birds stop singing when Gan Ceanach is near. It is unlucky for a young man to run into this fairy, as they will then be compelled to spend all of their money on trinkets and presents for their ladies. Women find themselves seduced by his conversation, gentle voice, and twinkling black eyes. If a maiden should ever kiss a Gan Ceanach he will instantly disappear leaving his victim to pine to death in his absence.”

– Encyclopedia of Fairies in World Folklore and Mythology by Theresa Bane

The only book series I’ve found a Gancanagh in is the Wicked Lovely series by Melissa Marr where Niall’s powers as a Gancanagh are supressed when he becomes the Dark King. (He’s of course the tortured-soul-type who believes his powers to be a curse.) How it acts in my writing:

Male Faery in Irish and Scottish Mythology that is known for seducing human women.

Personated by love, idleness and randiness.

Intoxicating substance in skin – contact makes him addictive. Once bedded by him, human women cannot think of anything but the next fix of him and they usually wither away since he deplores anything resembling commitment.

Suave and charming, he exudes pheromones to both sexes that make them want to be near him and please him. Sometimes to the extent of violence among each other to do so.

His spell on humans can be broken if they consume a tincture of liquorice, vanilla and rooibos (can be mixed in a drink). He can be chased off by the presence of strong human magic users showing that they are a viable threat.

If you’d like to read a story about this Fae, check out this flash fiction piece I wrote this week: Never Forget.

When Pinterest works properly again, I’ll create a board dedicated to this Fae and share the link here. What do you think of this Faery? Have you heard of it before?

3 thoughts on “Gancanagh of the Night #FolkloreThursday”