There are so many different celebrations this time of year. Mostly it has to do with joy and rebirth. But there are darker stories in folklore; creatures that make even the delinquents behave. Krampus is one of those creatures.

Though Krampus is mostly found in Alpine folklore, his origins go back to Norse mythology. As the grandson of Loki, mischief is what you expect – with a dose of fear. The Perchten are said to be creatures that scare off the spirits of winter, or mountain spirits themselves. The Perchten are seen to be the cohorts of the Krampus, himself the counterpart to Saint Nikolaus – who we might recognise as Father Christmas. Some suggest that Krampus originates from ancient Norse mythology, as the son of the goddess Hel. He is certainly an anti-hero that reminds us of, not just the Devil, but also of the satyrs of Greek myth. In folklore, Krampus and St. Nikolaus both arrive around December 5th. Children leave out their shoes for Saint Nikolaus, who will fill them with gifts if they have been good, or a rod if they have been naughty. In contrast, Krampus carries a birch bundle to beat naughty children before stuffing them into his basket and carrying them off – some say to his lair to be eaten, while others say to the underworld.

Recommended book on Krampus: The Krampus and the old, dark Christmas – Roots and Rebirth of the Folklore devil. By Al Ridenour

Krampus isn’t exactly the stuff of dreams: Bearing horns, dark hair, and fangs, the anti-St. Nicholas comes with a chain and bells that he lashes about, along with a bundle of birch sticks meant to swat naughty children. He then hauls the bad kids down to the underworld.

Krampus, whose name is derived from the German word krampen, meaning claw, is said to be the son of Hel in Norse mythology. The legendary beast also shares characteristics with other scary, demonic creatures in Greek mythology, including satyrs and fauns. 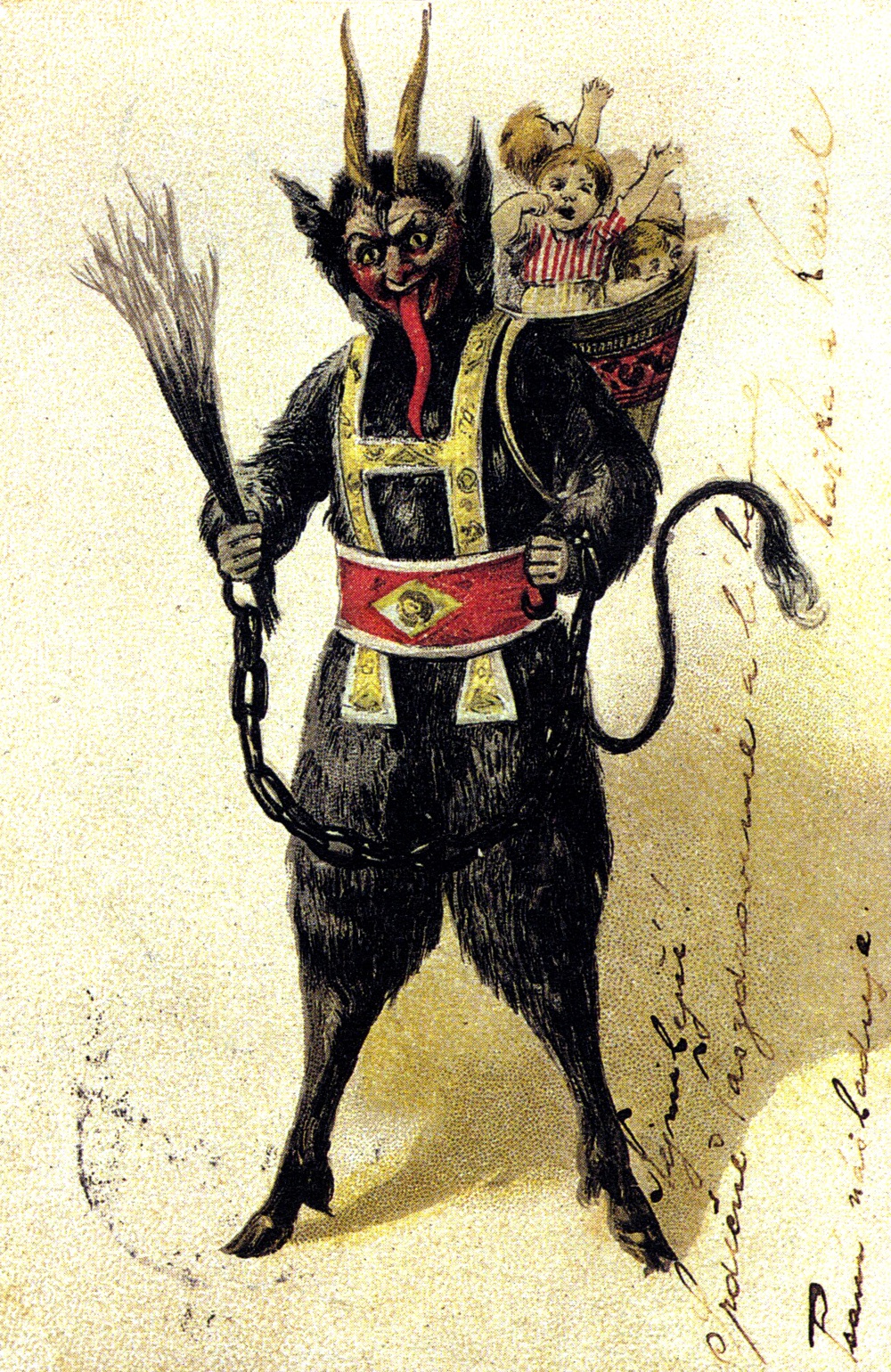 In the 17th century Krampus was tied into Christian celebrations, and paired with St. Nicholas. Legends say that he joined St. Nicholas on his treks the night before St. Nicholas’ feast. While St. Nicholas would reward the good with gifts and treats, Krampus would punish the bad. In some cases he would leave coal, but darker tales tell of ill-behaved children being stuffed into his sack to be carried away to hell.

His appearance is befitting of a demon. Dark matted fur with cloven hooves and large horns. His tongue is long and pointed and his teeth are sharp fangs. He is described as carrying chains or ruten, bundles of birch branches, to hit bad children with. Other times he is depicted with his sack, or even a washtub, which he uses to carry naughty children to the underworld where he will later torture and possibly even eat them.

Krampus (KRAAM-puus; O.H.Ger. Krampen “claw”) is an anti-Santa Wesen resembling a wild sheep that appeared in “Twelve Days of Krampus“. According to legend, he appears before Christmas and kidnaps naughty children who he keeps up in the tallest tree at the tallest spot. He does this with the intention of eating the children and then disappearing for a whole year.

When woged, Krampus chooses to wear a Santa outfit and has sharp teeth, curled horns, claws, and a flaming, red-forked tongue.

Despite his unique appearance and heavy outfit, he is capable of high levels of stealth, as none of his victims were aware of his presence before he spoke, and he could effortlessly disappear within a city despite being unable to guise himself as a human.

Krampus is extraordinarily strong, even by Wesen standards. He is capable of lifting struggling humans effortlessly with one hand and carrying them about with no discernible impairment. He is able to not only match blows with a Grimm, but even gain the upper hand in a fight.

Krampus hunts naughty children and adolescents, admonishing them for their bad behavior before beating them with a wooden switch and stuffing them in a large sack, leaving a large lump of coal behind at the abduction site. This coal is natively found in a mine on the highest arctic reach, near the North Pole. Upon abducting the children, Krampus hangs them from baskets like ornaments in the tallest tree in the tallest spot on the land with the intention of devouring them on the night of the Winter Solstice.

Krampus is the son of Hel, Goddess of the Underworld. He goes to the Mortal Realm during Yuletide to whip naughty children with a bundle of birch twigs or to give them a lump of coal. He works with the gift-giving witches Befana and Bertha.

He loses his power during the Winter Solstice and leaves the mortal realm soon after.

He has dark fur, twisted horns, reddish eyes and a forked tongue. His claws can rip through anything. His cloven hoofs can be heard in the dark, as can the chains he is covered with.

When no offerings are left during Samhain to appease him, he will abduct and even eat the naughty children instead of whipping them into shape. The Yule Riders will be released to find him when this happens. Sometimes he will weave baskets to keep the children in, other times he’ll throw them in a bag.

Krampus, like the Yule Riders, knows exactly what is in the hearts of mortals.

I decided to use Krampus, along with several others, in a new story for Stories on Scrolls. It picks up where The Torn Veil had left off.

“The cold and dark affected even her. She shivered as she heard the sound of echoing cloven hooves and rattling iron chains.

‘Go get him,’ she whispered to her Grims.” – The Darkest Day, Stories on Scrolls, Ronel Janse van Vuuren

I hope you enjoy reading the seventh tale in the series. Comments can be left here or on Wattpad – I always appreciate feedback. What do you think of Krampus? Where did you hear of him the first time? Do you think that children ought to be scared into behaving?