I’ve always thought of monkeys as mischievous. And looking at folklore, it seems that I’m right.

Monkey mythology is an important part of both Hindu / Buddhist lore (India) and Zodiac / Taoist / Buddhist lore (China). In the various tales… the monkey is portrayed initially as foolish, vain, and mischievous. Yet, in each tradition, the monkey learns valuable lessons along the way, makes changes, and eventually gains redemption. The monkey thus embodies the themes of repentance, responsibility, devotion, and the promise of salvation to all who sincerely seek it.

Monkeys are a historically prominent feature in the religion, folklore, and art of Japan, as well as in Japanese proverbs and idiomatic expressions.

The Japanese cultural meaning of the monkey has diachronically changed. Beginning with 8th-century historical records, monkeys were sacred mediators between gods and humans; around the 13th century, monkeys also became a “scapegoat” metaphor for tricksters and dislikable people. These roles gradually shifted until the 17th century, when the monkey usually represented the negative side of human nature, particularly people who foolishly imitate others.

The role of monkeys as mediators is evident within the Japanese Kōshin folk religion. This eclectic belief system incorporates Daoist beliefs about the sanshi (“Three Corpses“) “evil spirits that live in the human body and hasten death”, Shinto Sarugami mythology, and Buddhist beliefs about simian gods such as the Vānara “a monkey-like humanoid” in the Ramayana. Shōmen-Kongō “a fearsome, many-armed, Kōshin guardian deity”, who was supposedly able to make the Three Corpses sick and thus prevent them from reporting to Heaven, was commonly depicted with two or three monkey attendants.

In Daoist-Kōshin beliefs, the bodily Three Corpses keep records of their host’s misdeeds, which they report to Heaven bimonthly on the night gengshen while their human host is dreaming. But in a type of karmic loophole, someone who stays awake throughout that day and night can avoid receiving a shorter lifespan for their transgressions. The Japanese version of this custom, Kōshin-Machi (“Kōshin Waiting”), became an all-night party among friends.

Monkey lore in Japan took hold after the arrival of Buddhism (mid-6th century AD) and is tied to Japanese Shinto-Buddhism.5 The monkey was alternately a messenger to the gods or a physical manifestation of a god. The origin of the three monkeys, “Speak No Evil, Hear No Evil, See No Evil,” is also thought to have originated at the Hiei Shrine at Mt. Hiei.6 In folklore and geomancy beliefs, the Monkey was thought to protect against demons as well as disease and is a patron of fertility, safe childbirth, and harmonious marriages.

Monkeys are a common theme in Japanese folktales and fairy tales.

The monkey is a malicious trickster in Saru Kani Gassen (“Battle of the Crab and the Monkey“) over a rice-ball and a persimmon seed (Ozaki 1903:205–215).

In one widespread version, the monkey takes a rice ball from a crab in exchange for a persimmon seed, explaining to the crab that there is nothing left of a rice ball after its consumption, whereas a persimmon seed will grow and bear fruit. When the crab manages to grow the tree, which bears much fruit, the crab asks the monkey to fetch a persimmon. The monkey climbs up the tree and throws a persimmon at the crab, injuring or killing her, depending on the version. Eventually, the crab (or her children, in the version in which she is killed) and her sympathizers (a chestnut, a needle, a wasp, a mortar, dung, and so forth, depending upon the region) take revenge on the monkey. (Ohnuki-Tierney 1987:54)

– A Handbook of Philippine Folklore by Mellie Leandicho Lopez

Sun Wukong, also known as the Monkey King, is a mythological figure who features in a body of legends, which can be traced back to the period of the Song dynasty.[2] He appears as a main character in the 16th century Chinese classical novel Journey to the West. Sun Wukong is also found in many later stories and adaptations. In the novel, he is a monkey born from a stone who acquires supernatural powers through Taoist practices. After rebelling against heaven and being imprisoned under a mountain by the Buddha, he later accompanies the monk Xuanzang on a journey to retrieve Buddhist sutras from India.

Sun knows 72 transformations, which allow him to transform into various animals and objects; however, he is troubled in transforming into other forms, due to the accompanying incomplete transformation of his tail. Sun Wukong is a skilled fighter, capable of holding his own against the best warriors of heaven. Each of his hairs possess magical properties, capable of being transformed into clones of the Monkey King himself, and/or into various weapons, animals, and other objects. He knows spells to command wind, part water, conjure protective circles against demons, and freeze humans, demons, and gods alike.[3]

One of the most enduring Chinese literary characters, Sun Wukong has a varied background and colorful cultural history. Sun Wukong’s origin is from the White Monkey legends from the Chinese Chu kingdom (700–223 BC), who revered gibbons and especially white-colored ones.[4] These legends gave rise to stories and art motifs during the Han dynasty, eventually contributing to the rise of the Sun Wukong figure.[4] Sun Wukong was initially developed as a Taoist immortal before being incorporated into Buddhist myths.[4] He is also considered by some scholars to be influenced by elements of both Chinese folklore and the Hindu deity Hanuman from the Ramayana.[4][5][6]

If you’ve watched the movie “Forbidden Kingdom”, then you’ll have a good idea of the Monkey King and his powers.

For African folktales about the monkey:

Monkey and the shark, a tale from Eastern Africa.

How the chimpanzee’s bottom got swollen and red, a folktale from West Africa.

Heart of the Monkey, an African folktale (two versions for you to read: here and here).

And you can read The Clever Monkey: A Folktale from West Africa as an illustrated book. 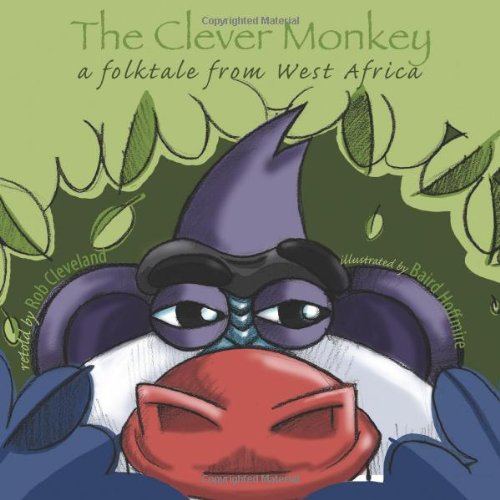 I even use monkeys (or rather, Faery-Hybrid monkeys) in my stories.

“A monkey jumped down from high above and landed on the path before her.

Glaring at the hybrid, she stepped past. She truly detested the Faery-Hybrids that ran about in the mortal world: they always went out of their way to be irritating. Especially the monkeys.

‘No. No. No,’ it said and blocked her path. It kept up a ridiculous dance, somehow pushing Anja further back.

‘No. You cheated: you sent something to hinder the other seekers. Now I shall keep you,’ it said in a sing-song voice.”

13 thoughts on “Monkeys in Mythology and Folklore #FolkloreThursday”