T is for Tokoloshe.

The Tokoloshe is perhaps the most well-known monster from African folklore. 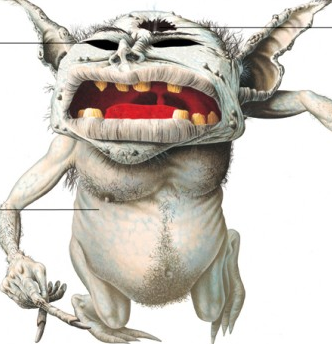 In Zulu mythology, Tikoloshe, Tokoloshe or Hili is a dwarf-like water sprite. It is considered a mischievous and evil spirit that can become invisible by drinking water. Tokoloshes are called upon by malevolent people to cause trouble for others. At its least harmful a tokoloshe can be used to scare children, but its power extends to causing illness or even the death of the victim. The creature might be banished by a n’anga (witch doctor), who has the power to expel it from the area.

Another explanation is that the Tokoloshe resembles a zombie, poltergeist, or gremlin, created by South African shamans who have been offended by someone. The tokoloshe may also wander, causing mischief wherever it goes, particularly to schoolchildren. Other details include its gremlin-like appearance and gouged out eyes.[1]

According to legend, the only way to keep the Tokoloshe away at night is to put a brick beneath each leg of one’s bed. However, this will not protect anything but the person whose bed it is along with the bed itself, as it may instead cause havoc not involving said people. They get their power from a hot poker thrust into the crown of the body during creation.

This is what you get on the first page of images when you Google “Tokoloshe”. As you can see, the Tokoloshe even finds its way onto the front page of newspapers (well, the tabloid kind at least).

Zimbabwe’s Tokoloshe is large, covered in fur with long talons and a bony spine reaching all the way down its back from the top of its skull. It also has glowing red eyes, emits a foul stench and speaks in a rasping voice. Fear of them is such that many people will not sleep on the floor, and will raise their beds higher by placing bricks underneath the legs. This enables them to see one hiding underneath the bed before they retire for the night. There’s a good reason to fear a Tokoloshe – it is claimed they will climb into the bed with the inhabitant and bite off a sleeping man’s toes and have their wicked, Tokoloshe way with a woman… vile creatures indeed! Some people will not even mention the name Tokoloshe for fear of summoning this extremely unwelcome guest. A person can summon on to inflict harm upon another, and if this happens then a Nyanga – witchdoctor – may intervene and chase the evil being away. Although only the victim and the culprit dealing with it can see a Tokoloshe, the creature is clearly visible to children.

Apparently, the Tokoloshe has extended family around the globe.

Barbegazi are mythical creatures from Swiss and French mythology. A barbegazi resembles a small white-furred man with a long beard and enormous feet. They travel in the mountains that are their home by skiing with their massive feet, or using them as snowshoes. They are rarely sighted by humans, but sometimes help shepherds round up lost sheep. Their greatest known excitement is surfing on avalanches with their remarkably large feet, but they are said to give low whistling cries to warn humans of the danger above, sometimes they will give their best effort to dig humans out from the snow. [Obviously not scary at all.]

The clurichaun is an Irish fairy-type creature which resembles the leprechaun. Some folklorists describe the clurichaun as a night “form” of the leprechaun, who goes out to drink after finishing his daily chores. Clurichauns are said to always be drunk. [Scary how?]

[Definitely family of the Tokoloshe…]

Gnomes  are small, celestial creatures which were prudish women in their past-lives, and now spend all of eternity looking out for prudish women (in parallel to the guardian angels in Catholic belief). Other uses of the term gnome remain obscure until the early 19th century, when it is taken up by authors of Romanticist collections of fairy tales and becomes mostly synonymous with the older word goblin. [Really not scary.]

Koro-pok-guru are a race of small people in folklore of the Ainu people of the northern Japanese islands. The Ainu believe that the koro-pok-guru were the people who lived in the Ainu’s land before the Ainu themselves lived there. They were short of stature, agile, and skilled at fishing. They lived in pits with roofs made from butterbur leaves. Long ago, the koro-pok-guru were on good terms with the Ainu, and would send them deer, fish, and other game and exchange goods with them. [No self-respecting Tokoloshe would ever be so kind to humans…]

A leprechaun is usually depicted as a little bearded man, wearing a coat and hat, who partakes in mischief. They are solitary creatures who spend their time making and mending shoes and have a hidden pot of gold at the end of the rainbow. If captured by a human, the leprechaun has the magical power to grant three wishes in exchange for their freedom. [At least they’re mischievous…]

Menehune, in Hawaiian mythology, are said to be a people, sometimes described as dwarfs in size, who live in the deep forests and hidden valleys of the Hawaiian Islands, far from the eyes of normal humans. [Obviously from the sweet branch of the family…]

The pech were a type of gnome-like creatures in Scottish Mythology. They were of short height but extremely strong. They brewed heather ale and battled against the Scots. [At least they weren’t friendly towards humans.]

[Definitely family of the Tokoloshe.]

Sheka in Polish mythology is field spirit that appears as a deformed dwarf with different coloured eyes and grass instead of hair. It appears either at noon or sunset and wear either all black or all white suits. According to local beliefs it leads wandering people in a field astray, give them diseases or ride them over with horses if they are found asleep. It enjoyed pulling the hair of peasants working in the midday. It also helped little children to get lost in the cornfields. If it catches a person, forces to sing. And that lasts for hours.

The Tiyanak  is a vampiric creature in Philippine mythology  that imitates the form of a child. It usually takes the form of a newborn baby and cries like one in the jungle to attract unwary travelers. Once it is picked up by the victim, it reverts to its true form and attacks the victim. [Malevolent enough to be family of the Tokoloshe.]

The Tokoloshe is the most terrifying creature I’ve written about up to date. In Water Witch, a warlock sends one to cause Kate bad dreams. Of course, she then places her bed on bricks instead of asking for help…

“The most tragic things I know about human nature is that all of us tend to put off living. We are all dreaming of some magical rose garden over the horizon instead of enjoying the roses that are blooming outside our windows today.” – Dale Carnegie

How about you: have you seen the Tokoloshe? Have you read stories about the Tokoloshe or used it in your own writing?